Home with Basement and Additions 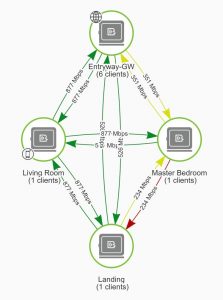 We had a customer with an older Vermont home that not only had a finished basement, but was extremely long which was the result of of multiple additions over the years.

Every few months over the past few years, they would call tech support complaining about slow ‘internet speeds’. Some of the support calls also included the lack of Wi-Fi behind brick fireplaces, their GMAVT WiFi Router and added on 3rd party access point didn’t have wireless signal.

“This is amazing! We’re finally getting coverage throughout the entire house!”

Their internet connection was our fiber-to-the-home and we were able to the fiber and router were not part of the problem. We brought over four Whole-Home Wi-Fi access points (AP) and set them up one by one in the closet where the internet connection was setup. We took one AP out at a time, moving it into the next room until it maintained the required mesh quality but covered another portion of the house.

Once the three access points we’re in place (1 in the basement, 1 in the entry way, a central living room unit, and a master bedroom AP), we saw solid Wi-Fi connectivity and performance between all devices and, and a great signal in the basement, entire first and second floors, and even outside.